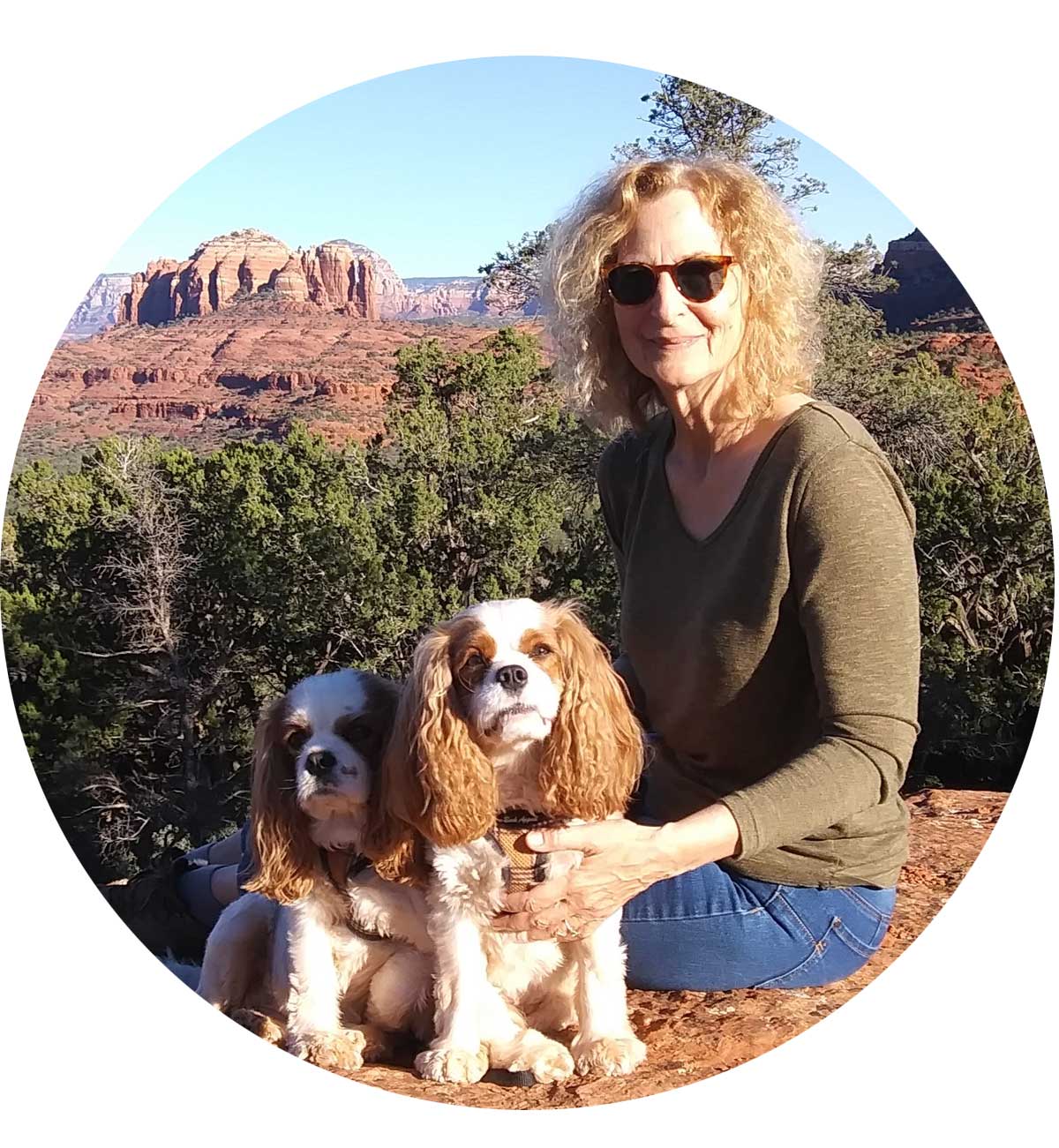 Gina Lake is a nondual spiritual teacher and the author of over twenty-five books about awakening to one’s true nature. She is also an astrologer and a channel with a master's degree in Counseling Psychology and over thirty years’ experience supporting people in their spiritual growth.

The focus of her writing and teaching is on helping people be in the present moment and live a happy and fulfilled life and on shedding light on the ego and other programming that interferes with that. Her teachings are most similar to Eckhart Tolle's, Adyashanti's, A Course in Miracles, and other nondual teachings.

In 2012, Jesus began dictating books through her, which she receives in the same way that Helen Schucman received A Course in Miracles. You can find out more about that process here.

These teachings from Jesus are nondual (Oneness) teachings, based on universal truth, not on any religion. They are messages of love and peace and how to be an expression of that in your life.

On a more personal note, here is Gina’s story:

In 1986, I realized I could pose a question mentally and get an answer mentally. Three years later, a very beneficial relationship with a wise nonphysical being began. This being was my inner teacher, mentor, and healer and behind my books up until 2012, when an important shift happened.

Throughout most of the 90s, while living in the San Francisco Bay Area, I was a writer, a metaphysical teacher, an astrologer, and a serious spiritual seeker. I spent much of my time meditating, doing inner work, and writing. However, although I experienced deep peace in meditation, as soon as meditation was over, I was back into my ego, with all its stories, problems, and issues. I didn’t realize at the time that the experience I had in meditation was an experience of who I really am. I thought of it as my Higher Self—something out there and not present in my life. It was something “I” was devoted to.

In 1998 my understanding shifted as a result of meeting Adyashanti, a teacher in both the Zen and Advaita tradition. With only a few words, he cut through some key misunderstandings I had as a spiritual seeker. One of the points he made is that awakening is possible, and I thought, “If this unassuming young man can awaken, then I can too.”

Six weeks later, during an intensive, while asking the classic inquiry question, "Who am I?" I had a spiritual awakening, which I define as a permanent identity shift from the ego to the true self. It was then that I deeply realized that I was that which I had experienced so often in my quiet moments. The “I” that I had thought myself to be was gone, left behind, like a pile of clothes on the floor, an abandoned costume. My identity seemed to have popped out of being “me” and entered into Consciousness, Awareness, Presence, Beingness, Essence, or whatever you might choose to call our essential self, our true nature. Following this shift, the voice in my head stopped. To my surprise, I was able to function normally without it. After five days, the voice in my head came back, but not as before, and I was filled with joy and peace for a honeymoon period of about a year.

Two weeks after that shift, I met Nirmala, a nondual teacher who had come to the Bay Area to give satsang. (The Intelligence that we are has perfect timing!) After a brief stay, he continued his travels around the U.S. We talked on the phone regularly for almost four months before we saw each other again. Over those months, we fell in love. In 2000, we moved to Arizona together and married.

For five years after awakening, I had no drive to teach or write, which was very strange to me, since I'd always been highly motivated to do those things. During those years, I did some art and counseling and created the book Nothing Personal from transcripts of Nirmala's satsangs. This was a period of dryness in my spiritual life. Although I wasn’t suffering, I also wasn’t in joy. It was an in-between place: I couldn’t go back to being “me” (whoever that was could no longer be found), but I also wasn’t firmly established in Presence. A part of me missed the juicy drama of suffering and having problems (I’m a Pisces and a four on the Enneagram), but I couldn’t do drama anymore. Eventually my consciousness deepened, and I began to embody Essence more fully, as chunks of conditioning fell away slowly, one by one.

In 2004, I began writing again, and between 2004 and 2012 I wrote many books about awakening and being present. At the end of that period, I experienced a health crisis, which forced me to slow down. This led, I believe, to a deepening spiritually, which occurred in 2012. At that time, I had numerous inner experiences of Mother Mary, Jesus, and a circle of other Ascended Masters, who appeared to me in my mind’s eye and spoke to me in words I could clearly hear in my mind. The reason they gave me for appearing at that time is that I had reached a point in my growth and in my life when I would be working more closely with them. Specifically, they wanted to dictate books through me that would be helpful in awakening people.

Here are a few of the inner experiences I had in 2013 with Mother Mary and Jesus, which I recorded in my spiritual log:

"Jesus’s face materialized, just for a few seconds, and he began to talk with me. I saw this in my mind’s eye and I heard his words inside my head. Jesus said that he and various Ascended Masters were behind my work and that I’d prepared for this role as a channel for eons. He said they are healing the world through the words I and others write and that words are especially powerful today because they can reach so many people. When Jesus spoke, I could feel how huge he is as a spiritual being. He is one of the main guardians of this planet. He has explained to me that he is available to all who are devoted to him and to anyone who calls upon him."

On another occasion, I wrote this:

"I felt and saw in my mind’s eye a circle of beings around me who were Ascended Masters. They looked like a circle of light beings. Although they were indistinct figures, a sense of sacredness and holiness permeated the gathering. They were conveying intuitively to me a sense of celebration, like a birthday. There was a flame above each of their heads and above mine, as I stood in the center of the circle. The scene looked a little like a birthday cake, and I wondered if the candles on birthday cakes symbolized a new birth or new phase, as this seemed to. I was told this was an initiation. After a few moments, they began to leave, one by one, and only one remained. It was Jesus. He said, 'Welcome, my beloved child,' and held out his arms. 'You are part of this circle now. You have arrived at your destination. We will always be with you. You will receive training soon."

It was later explained to me that the training Jesus was speaking about was in being an instrument of his teachings and a transmitter for Christ Consciousness and that this training would happen while I was asleep and at other times. More about my relationship with Jesus and how I write these books.

Since 2012, I've written a book by Mother Mary, Ten Teachings for One World, and thirteen others by Jesus: All Grace, In the World but Not of It, A Heroic Life, The Jesus Trilogy, What Jesus Wants You to Know Today, Awakening Love, a 5-book series called Jesus Speaking, Cycles of the Soul, and Faith, Facts, and Fiction. If you aren't sure which book to read first, From Stress to Stillness, In the World but Not of It, Awakening Love, or A Heroic Life are good entry points to these teachings. My books can be read in any order.

In September 2017, something new developed: My husband and I both experienced another deepening spiritually. Shortly after that, Jesus asked both of us if we would be willing to transmit Christ Consciousness to others in groups in online Zoom meetings. You can find out more about Christ Consciousness Transmissions here. And in 2022, on Saturdays, we began offering a weekly free healing and prayer circle, also on Zoom.

I also have three online courses, including a 100-day course that will help you become established in Presence, which is called Awakening Now.

Nirmala and I live in Sedona, Arizona. Nirmala’s website is endless-satsang.com, where you can download his free spiritual ebook, watch videos, and listen to audio recordings of him. He is also available for spiritual mentoring over the phone or Zoom.

Interview about my spiritual journey, in 2012, before my work with Jesus, by Rick Archer of batgap.com.

And get an ebook of Love and Surrender for free!